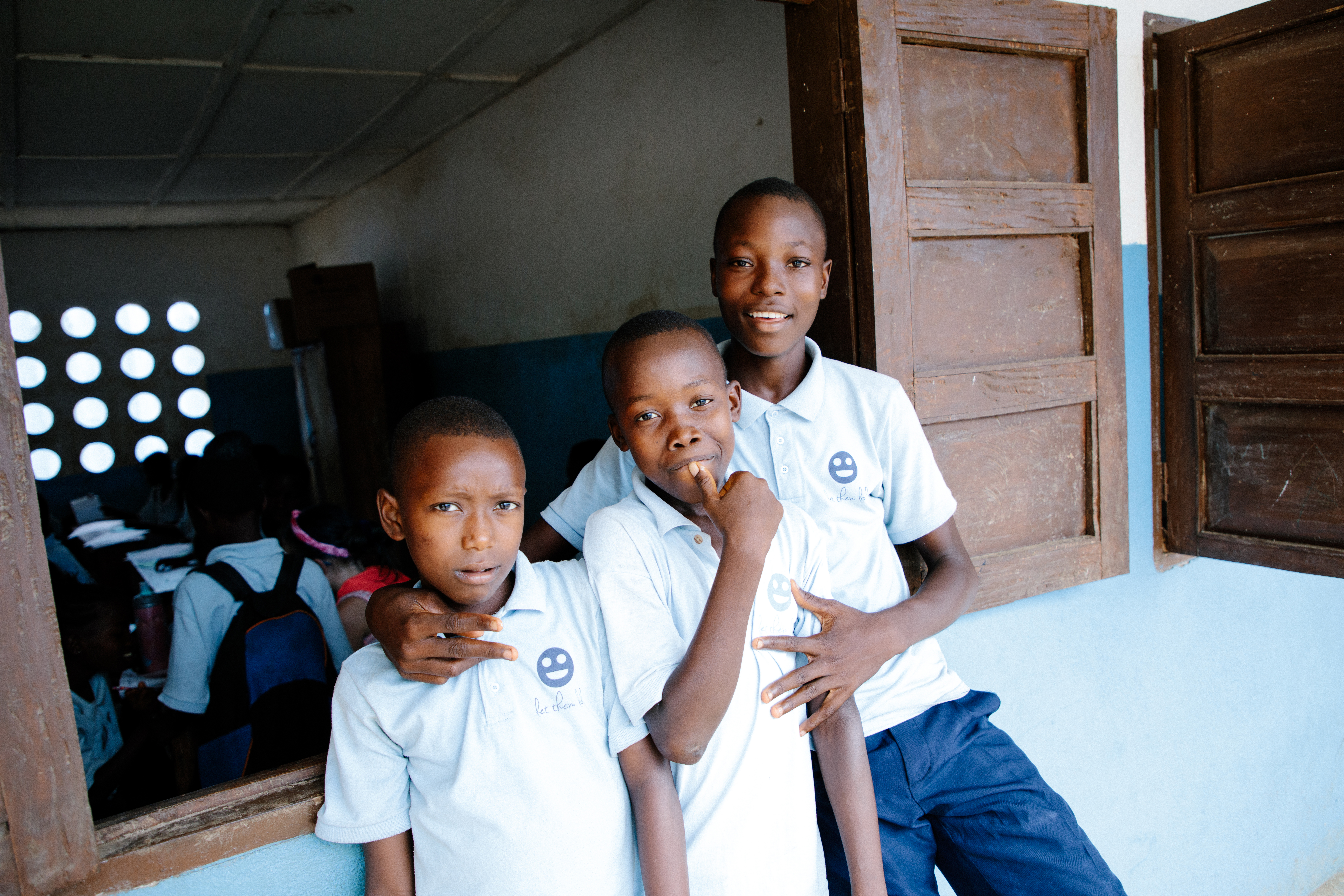 This week we’re thrilled to feature a member of our community – and a recent Let Them LOL trip member to visit Sierra Leone – Mary Beth, who wrote a reflection of her travels and was excited to share with our community. Incredible person, founder of an initiative to feed the hungry in her city, engineer, wife of Wil, and sister of our US staff member Andrew, she’s been involved with LTLOL since her Water Ninja Gala volunteering days (and initially probably by family obligation association). She and her husband sponsor a student at Hope Rising Academy, helped to fund a well in honor/memory of a beloved family member, and needless to say are considered a valued part our community. We hope you’ll be as moved as we are:

The first time I volunteered at the NYC Relief Bus in East Harlem my friend Sharon gave me a piece of advice. “When you are serving, always try to focus on what we have in common,” she told me. At first that seemed hard. The ways we are different were obvious but the ways we are similar seemed a little less clear. But as I thought about it, I realized there was a guy wearing a Giants hat. Wil talked to him about football. We were able to all bond a little when we all agreed that the bread was amazing. We talked about the different neighborhoods in NYC and the best and worst things about living in the different boroughs. We ate together. We prayed together for health and safety. We were not the same, but we had a lot in common.

The advice that Sharon gave me has stuck with me. When traveling to Sierra Leone we were determined to keep this mindset. We knew that the ways that our lives differed from the people we met in Sierra Leone were abundant. The ways that we were similar are also abundant, although perhaps a little less obvious, at least for us.

When we first arrived at the Let them LOL campus (around 2AM, haha) we were greeted by a group of enthusiastic staff. Everyone was hugging everyone. “We made it!” One of the first people we met was May. I remember opening the door of the car and her cheering, “Welcome to Africa!” Later in the week, May asked us if the food that they had been preparing for us was good. “We want you to like it here. We don’t want you to miss home.” she said. “I would feel the same way if she visited me.” I thought. We are both proud of where we live, and when others come, we want them to love it. Whenever Wil and I have visitors to our home in NYC we always do our best to show them our favorite things about the city. We want them to like it here. We don’t want them to miss home. Our homes are very different, but our hearts are alike.

The morning of our first full day we visited several villages. The first village had recently received a well. Nick took some video and pictures of the residents using their well so that we can show people back home and share their story. They stood around their well and sang a song of celebration and gratitude. “I’ve seen these videos so many times. But this is real. They didn’t have clean water but now they do. Their lives are changed. This is blowing my mind.” I thought. “Hard to relate.” Next we visited a village where the well was in the process of being drilled. The hope and anticipation was almost tangible. “Soon, they will be celebrating here too.” Next we visited two villages that did not yet have wells. They showed us where they had to go to get water. They explained that although we were visiting in the rainy season, the dry season was much worse, and they would have to walk much further and the water would be much lower. I struggled to see the ways we were similar. These were problems I have never had to worry about. Nick took a video of a woman carrying her water from a small pond back to the village. To the other women watching, it was funny that we were asking them to do such an ordinary thing in front of us so we could take a video of it. They laughed and giggled as they watched. Their laughing made us laugh too. “There it is” I thought. “Laughter. Something we have in common.”

Later that day we were able to meet a bunch of the kids that live on campus. Melanie and Abbie brought a suitcase full of fun things for the kids like craft supplies and sports equipment. The girls devoured the bracelet making supplies. “Just like my nieces would” I thought. Wil helped pump up the soccer balls and the boys started kicking the ball around, inside, where the girls were making bracelets. “Boys are still boys” we thought, while reminding them that there was much more space to play ‘football’ outside. We played together and we laughed together.

After playing catch for a little while two of the students, Crusher and Princess, asked if I would like to see their school. We walked over to their school and they showed me where their classrooms were and where everyone gathered. We walked around and I thought “Ok, it looks a little different, but the basics are here. Classrooms, teachers, chalk boards, flag pole, lunch.” Then they showed me their well. They cupped their hands and drank freely from the well. “Right. This is why we are here.” I thought.

At times it felt unfair for me to try to find similarities between my life and the lives that I was witnessing. How can I look at these struggles and try to say that I understand, or that we are the same? Honestly, I can’t do that. We are not the same. I have never worried about whether my water would make me sick. I never questioned whether or not I would be able to receive a high school education. When I am sick, I have never had to decide whether or not it is possible to travel to see a doctor. Our lives and our struggles are different in many ways. But, in many ways, our hearts, our dreams, our desires – those are the same. And no progress will be made if I only see us as different. That is why we have to focus on what we have in common. The kids at Hope Rising have the same potential that the kids in Buffalo, NY have. They deserve to have the same dreams. Their environment and circumstances are different but their potential is not.

Like when Justin and Crusher were walking home from school. Wil and I were walking a little bit behind them. They walked past Baba. “Hello Baba!” one of them yelled. “Hello boys, how was school?”  “Fine!” They responded. “So ordinary, so normal.” I thought. For a moment, you forget that if those kids didn’t live at Let Them LOL many would be struggling to survive as orphans. You could almost forget that outside the Let Them LOL gate there were still plenty of kids struggling to find safe water and food. That quality education was a luxury that many do not get a chance to enjoy. Because though our hearts may be similar, our lives are not.

We heard countless students say that they wanted to be nurses and lawyers when they grew up. Wil and I taught a bridge engineering class twice. We did the same type of activities with the students that we had done when we were in school. Basic vocab, build your own bridge, work in groups, and maybe a field trip. We showed the students pictures of bridges that exist in their own country and some crazy bridges that exist in other parts of the world. One girl pointed to a particularly curvy and artistic bridge and said, “I want to build one of these in our village!” Why shouldn’t she want that?! That bridge was really cool, I want one in my town too!

What a gift it was to witness this in person. To see hope. To see a generation of youth growing up with dreams to be nurses, teachers, lawyers, and (maybe) engineers. To laugh and pray together. To pat each other on the back, shake each others hand, and give each other hugs.

Focus on what you have in common. At home, at work, at the grocery store, at the well. It is much more beautiful than the alternative. And when it feels like there is nothing in common, find something to laugh about. Laughter is something we share.

Let hope rise with the sound of laughter.

Looking for a tangible way to get involved in what’s going on in Sierra Leone? We’ve just opened a brand new opportunity to sponsor staff members in our program abroad – providing much needed healthcare, daily nutrition, and regular mutual encouragement as we fight for hope together! Interested? Stop by our Volunteer Center or contact Andrew@letthemlol.com!